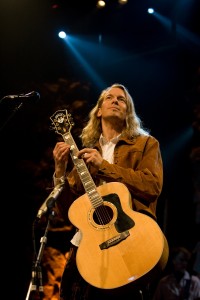 Billy McLaughlin has been changing people’s idea of what an acoustic guitar can sound like since the 1980’s.

“…you may swear Billy McLaughlin is two of the greatest acoustic guitarists you’ve ever heard.”
– Pittsburgh Post Gazette

“… it’s amazing that such an extensive sound comes from one instrument.”
– Chicago Sun Times

He is recognized as an innovative performer and composer who embraces the advantages of acoustic guitar amplification, unorthodox techniques and altered tunings while celebrating a gift for melody. His enormous yet fluid acoustic guitar tone has carried him around the world, to Billboard’s Top-Ten Chart and most recently through a devastating medical disorder called focal dystonia. McLaughlin has had to re-learn the guitar left- handed and is in the early stages of what might be described as “one of the great musical- comeback stories of all time.” His story is the subject of an award-winning documentary film called Changing Keys – Billy McLaughlin and the Mysteries of Dystonia.

A serious professional in his teens, McLaughlin left his home and rock band in Minneapolis for the University of Southern California guitar department where he became interested in minimalist composers Phillip Glass and Steve Reich. Employing what would become his signature style of placing both hands on the fretboard, McLaughlin began composing for his first release using a technique of “hammer-ons” and “pull-offs” that create a harp-like effect on the acoustic guitar. This unusual approach led Billy to extensive national touring earning multiple NACA Campus Entertainer awards. In 1995 McLaughlin signed a multi-album international contract with Virgin Records label Narada whose first release, Fingerdance, peaked at #7 on the Billboard charts. Hundreds of shows a year and another release deep into the contract with Narada, he began struggling with his hands – something felt “off” and it was getting worse.

For two years he struggled with a mysterious and unrelenting condition of unexplainable muscle spasms and contractions. Shockingly as symptoms grew worse he could no longer perform most of his own repertoire. In 2001, Billy was diagnosed with a neuromuscular disorder called focal dystonia. The diagnosis was confirmed at the Mayo Clinic. Going against doctors’ recommendations to quit music and look for other work, McLaughlin focused on his songwriting and returned to his rock band which was less demanding for his hands. Despite releasing his ensemble’s best recording, Finally – Live!(2002) it was clear that focal dystonia had ended McLaughlin’s career as a virtuoso guitarist.

Feeling utterly lost without his music and not willing to give up, McLaughlin began the unlikely journey of teaching himself to play in his signature style, left-handed! Late in 2004 a documentary film crew began following McLaughlin’s desperate attempt to regain his career. Warned by doctors of a higher likelihood for developing focal dystonia in his remaining good hand, McLaughlin chose to press on towards an ambitious goal he had yet to achieve – to perform and record a new project with a string orchestra.

In January 2007, McLaughlin published a limited release of Into the Light, a concert recording of compositions for acoustic guitar with string orchestra. This collaboration with Grammy nominated arranger, Eugenio Toussaint, is McLaughlin’s first recording as a left-handed guitarist. In 2008, Coming Back Alive, a companion DVD shot by volunteers from the WWE broadcast crew capturing the historic performance was completed and released via direct marketing.

Billy’s story is truly an inspiration! Encouraged by Keller/Williams founder and now friend, best-selling author Gary Keller, Billy’s speaking career started unexpectedly when Gary invited Billy to speak for the first time in front of 6000+ at the Orlando Convention Center for the Keller Williams Family Reunion NSM. Billy brought down the house and a month later was invited to finish off the remaining 16 cities of Gary’s book tour (Shift). Word got out and Billy’s speaking career has taken off (click here for client list).
The Dystonia Medical Research Foundation (Chicago, IL) has named Billy their first Ambassador of Awareness and for his efforts he was awarded the Public Leadership in Neurology by the American Academy of Neurology. Previous winner of this prestigious award include Paul Allen (MicroSoft), Julie Andrews, Cuba Gooding and Michael J. Foxx. A sequel to the documentary about Billy’s amazing comeback Changing Keys (Houston Film Festival honors with PBS broadcast history) is in pre-production. KPBS San Diego produced concert film, Starry Night – Billy McLaughlin with Orchestra Nova, has won two regional Emmy Awards (best director, Don Johnson, and best composer, Billy McLaughlin). A TEDx Atlanta appearance has further highlighted Billy’s ability to connect with audiences hungry for personal narratives on change, grit, resilience, innovation and redefining the impossible. Keynote speaking continues in China, the Philippines, India, Europe and extensively across the US.

“Many people fail because they quit too soon” reads the fortune cookie quote that Billy taped to his dashboard in the midst of his comeback – it remains there to this day.